In this chapter we will introduce the concept of transactions. With this modification, we actually shift from our project from a “general purpose” blockchain to a cryptocurrency. As a result, we can send coins to addresses if we can show a proof that we own them in the first place.

To enable all this, a lot of new concepts must presented. This includes public-key cryptography, signatures and transactions inputs and outputs.

This chapter has been copied from the original Naivecoin tutorial made by Lauri Hartikka and adapted for the Proof of Stake consensus. See the original page here: https://lhartikk.github.io/jekyll/update/2017/07/12/chapter3.html 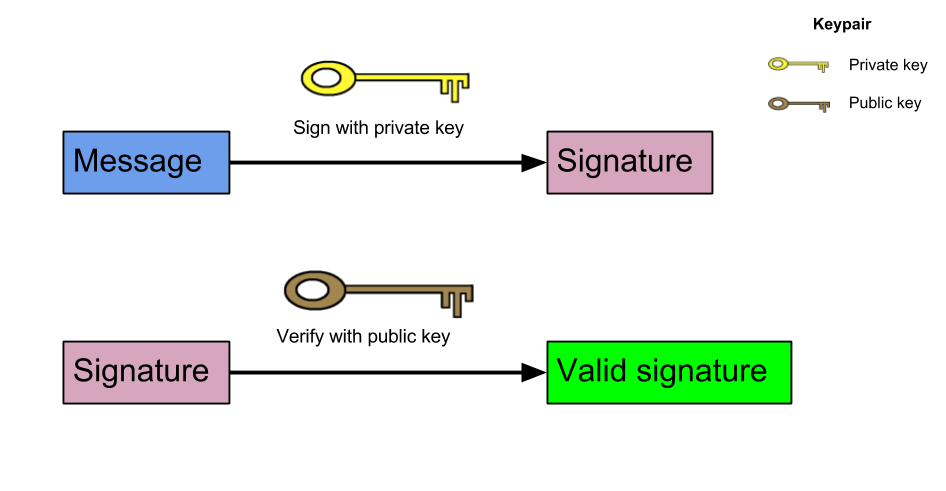 We will use a library called elliptic for the public-key cryptography, which uses elliptic curves. (= ECDSA)

Conclusively, two different cryptographic functions are used for different purposes in the cryptocurrency:

Private-keys and public keys (in ECDSA)

The public key can be derived from the private key. The public-key will be used as the ‘receiver’ (= address) of the coins in a transaction.

Before writing any code, let’s get an overview about the structure of transactions. Transactions consists of two components: inputs and outputs. Outputs specify where the coins are sent and inputs give a proof that the coins that are actually sent exists in the first place and are owned by the “sender”. Inputs always refer to an existing (unspent) output.

Transaction outputs (txOut) consists of an address and an amount of coins. The address is an ECDSA public-key. This means that the user having the private-key of the referenced public-key (=address) will be able to access the coins.

Transaction inputs (txIn) provide the information “where” the coins are coming from. Each txIn refer to an earlier output, from which the coins are ‘unlocked’, with the signature. These unlocked coins are now ‘available’ for the txOuts. The signature gives proof that only the user, that has the private-key of the referred public-key ( =address) could have created the transaction.

As a conclusion, it can also be thought that the txIns unlock the coins and the txOuts ‘relock’ the coins: 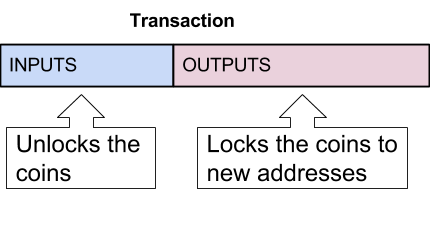 The transactions structure itself is quite simple as we have now defined txIns and txOuts.

Let’s try to understand what happens if someone tries to modify the transaction:

The data structure for an unspent transaction output looks like this:

To handle this, we will first retrieve all new unspent transaction outputs (newUnspentTxOuts) from the new block:

The described code and functionality is contained in the updateUnspentTxOuts method. It should be noted that this method is called only after the transactions in the block (and the block itself) has been validated.

We can now finally lay out the rules what makes a transaction valid:

The transaction must conform with the defined classes of Transaction, TxIn and TxOut

The id in the transaction must be correctly calculated.

The signatures in the txIns must be valid and the referenced outputs must have not been spent.

Transaction inputs must always refer to unspent transaction outputs, but from where does the initial coins come in to the blockchain? To solve this, a special type of transaction is introduced: coinbase transaction

The coinbase transaction is always the first transaction in the block and it is included by the minter of the block. The coinbase reward acts as an incentive for the nodes: if you find the block, you are able to collect 50 coins.

We included the concept of transactions to the blockchain. The basic idea is quite simple: we refer to unspent outputs in transaction inputs and use signatures to show that the unlocking part is valid. We then use outputs to “relock” them to a receiver address.

However, creating transactions is still very difficult. We must manually create the inputs and outputs of the transactions and sign them using our private keys. This will change when we introduce wallets in the next chapter.

There is also no transaction relaying yet: to include a transaction to the blockchain, you must mint it yourself. This is also the reason we did not yet introduce the concept of transaction fee.